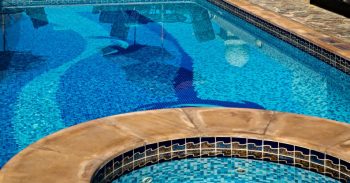 You’ve probably been told your whole life, “Get out of a pool if you see lightning!”

But, is it really necessary?

Will lightning really strike you in a pool?

It’s always important to be safe around pools. Getting your pool repaired when it becomes damaged is a necessary component of owning a pool.

Let’s find out the scoop on lightning and swimming pools. Read on for the actual facts.

What is the difference between a conductor and an insulator of electricity?

To answer the question about whether or not you can be struck by lightning in a pool, you first need to understand the difference between a conductor and an insulator.

A conductor is a material that allows heat and electricity to flow through it. It conducts electricity because it allows electrons to flow easily inside it from atom to atom.

Some common conductors include copper, aluminum, gold, and silver.

An insulator is a material that resists or doesn’t allow heat or electricity current to flow through it. It restricts the free flow of electrons from atom to atom and molecule to molecule.

Some common insulators include glass, air, plastic, rubber, and wood.

Is chlorine water a conductor or insulator of electricity?

Because chlorine is not a metal, by itself it is not a good conductor of electricity. But, when you add chlorine to pool water, it chemically changes the water.

Chlorine water is a good conductor of electricity compared to pure water. This is because there is an increase in the number of ions that help conduct electricity.

Once chlorine is introduced into the water, the amount of electrolytes rises, which in turn raises the conductivity of the water.

Make sure your pool is clean and ready for swimmers on all the sunny days.  Call Sun Valley Pool Service to schedule a pool cleaning service today.

Is saltwater a conductor or insulator of electricity?

Saltwater is a good conductor of electricity. When sodium chloride dissolves in water, the sodium and chlorine atoms separate under the influence of the water molecules.

They become free to move around in the water as positively and negatively charged ions which allow the solution to conduct electricity.

Is natural water like lakes and streams a conductor or insulator of electricity?

The natural water in natural sources, such as lakes and streams, is an excellent electricity conductor. The conductivity is a result of the minerals dissolved in natural water and even pool water.

You’ll probably be electrocuted if you’re in a lake or stream when lightning hits.

How often does lightning strike water?

Lightning does not strike the ocean as much as it strikes land. However, when it does it spreads out over the water, which acts as a good conductor. Lightning strikes the ocean many times a day.

Research has shown that there are about 5 million lightning flashes per day in the world. Even though 70% of the surface of the earth is covered by water, only about 10% of lightning hits the oceans. 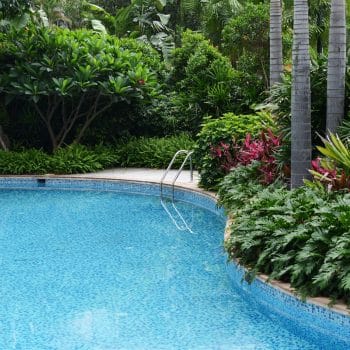 Lightning strikes can surprisingly miss tall buildings and hit the low surfaces of nearby swimming pools.

The pool water conducts electricity and spreads out the impact of the strike.

It will then charge the water so everyone who is in the water is shocked.

You can suffer electric shock and burns, even if lightning doesn’t hit you directly.

You can die from indirect lightning strikes in pools, so avoid swimming during thunderstorms.

It is not safe for you to be out on the ocean in a boat, or swimming in a pool when there is lightning because you stick up out of the water and you will be more likely to be hit.

Keeping up with routine pool maintenance is a great way to make sure your pool is a safe place.

Use caution when swimming in any kind of water.  If you see lightning, get out immediately.

Have Questions?
We're Here to Help: